The WWE Wiki is a wIki focusing on all about the world's premier company WWE from the beginning to our days, from wrestlers to teams, from brands to championships, from tournaments to events and much more. With Wikia as a host, I wish to start a great community based in the WWE world.

As a community, we want to show a good example and how it is the WWE world to everyone, from great pictures to great pages to make a great wiki. Let's share show what is WWE all about!

If you are interested, you can start by creating an article or you can search for a page to you to edit.

The Money in the Bank ladder match is a ladder match held by the professional wrestling promotion WWE. At first contested at WrestleMania, a separate Money in the Bank pay-per-view was established. The prize in the match is a briefcase containing a contract for a world championship match, which can be "cashed in" by the holder of the briefcase at any point in the year following his victory.

NXT
Add a photo to this gallery

Male Wrestler of the Month 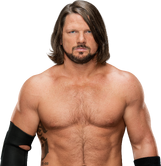 Allen Neal Jones (born June 2, 1977), best known by the ring name AJ Styles (also stylized as A.J. Styles), is an American professional wrestler currently signed to WWE performing on the SmackDown brand, where he is the current United States Champion in his second reign. In 2014, he signed with New Japan Pro Wrestling (NJPW) and won the IWGP Heavyweight Championship in his first match with the company, later becoming the leader of the Bullet Club.Read more...

Feamle Wrestler of the Month

Hell in a Cell, live Sunday on October 8.

Please be respectful and keep everything in line with his proper information. Troublemakers will not be tolerated.

At now, this wiki is in a developmental phase. Therefore, if you see any page that isn't set up like that, it would be a big help if you fix it up and we need help to make more pages and contribution but please read the Guidelines to keep up with editing and contributing without any kind of problem.

Most importantly... HAVE FUN!

Retrieved from "https://wwewrestling.fandom.com/wiki/WWE_Wiki?oldid=5255"
Community content is available under CC-BY-SA unless otherwise noted.